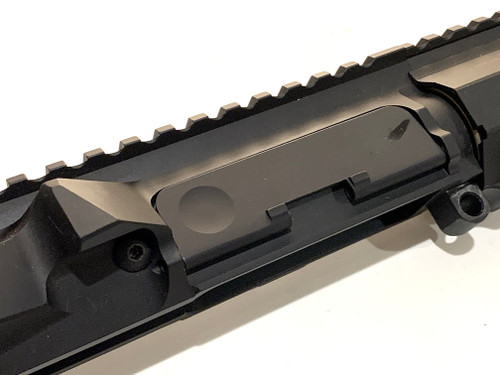 We had resisted making a Forward Controls version of ejection port cover, mainly because we were preoccupied with other projects, but when we had a moment to list the things we wanted on an FCD version, it wasn't long before it became a project we became excited about.
EPC (Ejection Port Cover) is based on TDP dimensions, with thoughtful Forward Control touches.  Billet machined from 7075 aluminum, and hard coat Type III anodized, it incorporates features we think many will find useful.
EPC has two "tabs" flanking the cutout for the port cover spring.  These tabs allow the EPC to rest on the upper at a greater angle when it's in the down/open position, which provides more space between the port cover and lower receiver. Their job is to better allow the user's finger to get underneath the port cover when he wishes to swing it up/close.
Left: TDP ejection port cover.  Right: EPC.  Both in the down/open position.  Please note that depending on the upper receiver, the area below the ejection port cover will vary in thickness, which affects the angle of the EPC when the port cover is open/down. 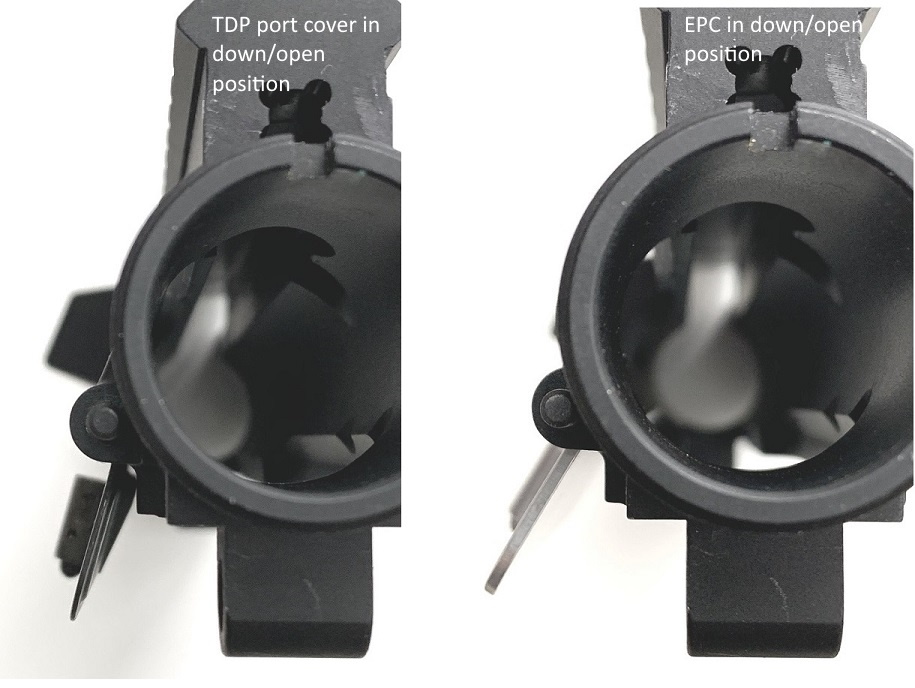 Another feature is a shallow circular depression on the side of the EPC to provide texture tactile feedback to the user's finger when he's closing the EPC.  A flat surface provides nothing to the user to differentiate one surface from another, it also provides no traction.  A shallow circular depression on the left side of the EPC does both.  We incorporate flat surfaces with care as they  have their uses .  In this case, EPC's exterior surface is treated as a control surface, where a flat surface rarely makes sense.
EPC is compatible with TDP spec upper receivers.
Weight: 0.30oz.
Proudly designed and made in the USA.
NOTE:
EPC is incompatible with BCM's Mk2, Aero M4E1 and Centurion Arms CM4 upper receivers.
Initial closing and opening of EPC may be stiff, this is normal, and will become easier with 2 or 3 closing/opening cycles.
Please examine the upper's ejection port cover latch/detent relief cut.  If the ejection port port latch/detent relief cut is cut too shallow, slight modification may be required for EPC to close.
Below picture shows two upper receivers.  The difference of the relief cut is visibly different.  On the TDP spec Colt, the shape of the cut is beveled.  On the no name upper, the edge has a 90 degree angle.  ECP will fail to close on the upper on the right without slightly relieving the notch.